It was the first-ever MLS playoff match at Allianz Field when Minnesota United hosted LA Galaxy last weekend. The Loons, after finishing 10th in the Western Conference last season, managed to climb six spots up the table to finish fourth in 2019. The atmosphere in the stadium was electric, especially since the home team’s tactics seemed to be working brilliantly.

Minnesota United dominated the first half, creating chance after chance. Their lack of ruthlessness in front of the net, however, cost them when LA Galaxy scored two goals in four minutes in the second half. Minnesota brought it back to one goal late into the game, but it was too little too late. Find out why Minnesota United’s tactics deserved a win in this MLS tactical analysis.

Minnesota United lined up in a standard 4-4-2. Head coach Adrian Heath only made two personnel changes to his team’s 1-0 loss to Seattle Sounders in the last game of the season. Darwin Quintero and Hassani Dotson were dropped in favour of Robin Lod and Kevin Molino. The biggest shock was the exclusion of Quintero who has registered 10 goals and six assists in 31 games for United.

LA Galaxy stuck with their tried and trusted 4-3-3. Guillermo Barros Schelotto also made two changes to his side. Rolf Feltscher was dropped at right-back. Daniel Steres started in his place, but started at centre-back, pushing Giancarlo González out to the right. Joe Corona also made way for Perry Kitchen. 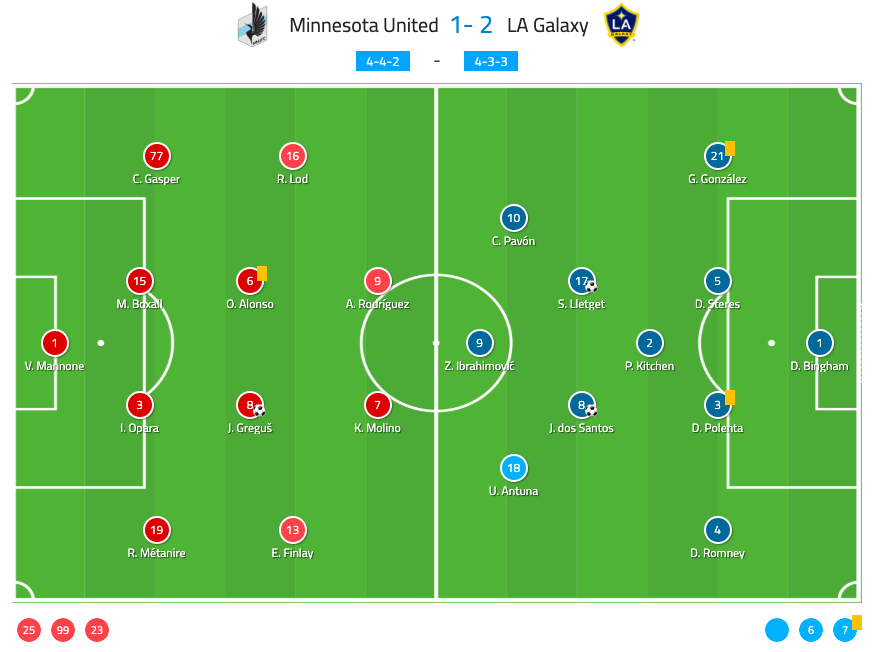 After the first 45 minutes, LA Galaxy were relieved to make it to halftime without conceding. Minnesota United had created chance after chance, but an opening goal continued to allude them. It was more than just luck, however, that presented Minnesota with so many chances. The team’s tactics were obvious; target the flanks and penetrate LA Galaxy with balls from wide areas.

If you want to read the full tactical analysis of this game, head over to totalfootballanalysis.com or click HERE

If you love tactical analysis, then you’ll love the digital magazines from totalfootballanalysis.com – a guaranteed 100+ pages of pure tactical analysis covering topics from the Premier League, Serie A, La Liga, Bundesliga and many, many more. Buy your copy of the October issue for just ₤4.99 here

MLS suspended for 30 days due to Coronavirus fears

Locadia is enjoying his life in States