This post initially featured on our dedicated analysis site for football around the globe, totalfootballanalysis.com

At the end of this competition, Atlanta United faced with Portland Timbers. The MLS Cup final had a very special flavour, as Tata Martino”s man marched to there for the first time with quite ease. Secondly, now they have the opportunity to win it for the first time, in addition, in their home stadium.

Now, in this analysis, I will focus on Atlanta gameplan and their point of view. How they managed to win it with a smooth 2-0 victory.

Narratives before the match were quite simple due to Atlanta’s strong chances of winning and the opponent’s role as an underdog. Thus the only big question was before the final, will Portland able to make difficult for Atlanta?

First, let’s take a look at how Atlanta’s system worked. Tata Martino used several formations throughout the campaign. Nevertheless, he stuck to the 3-5-2 system during the playoffs. Since it is a flexible and adaptable system it can apply to every situation. It capable of dominant play and when it needed they could form a more defensive set-up with ordering the wingbacks into the first line.

In possession, the back three launch the progression, mostly by Larentowicz (or Perez) who had played as a defensive midfielder earlier in this season. Remedi usually remains back to give coverage between the attacking and defensive units, whilst the other two of the midfield trio, Gressel and Nagbe push further up in the field as a flexible #8s. For occupying positions in the halfspaces. Almiron tends to drop between them for creating a better connection. Martinez at the top of this formations since the positioning in the opposite defensive line. In the wingbacks’ role, Garza and Escobar acting. Duties to hugging the touchlines and running up down.

There were not any surprises in the line-ups since both coaches put their best possible XI into the field. Atlanta played in their usual 3-5-2, whilst Portland formed up in a 4-2-3-1 with a double pivot in the midfield. The main question in the tactical side was how will Giovanni Savarese’s man compete with Atlanta’s structure?

In every defensive formation, there are exploitable open spaces. This is what the opposite team try to targeting and take advantage of it. In Portland’s structure, you find these spaces next to the double pivot, outsides of Chara and Guzman. This exactly the same zone where Garza and Escobar positioning. Thus it is an obvious choice for coach Martino to take advantage of the wider structure.

Moreover, most defences protect the centre in the first place since it is closer to the goal and the most important area. Therefore, Portland primary focus was on that zone. Thus Savarese ordered his team to form a narrow 4-4-2 in defence. However, it allowed Atlanta to use their wingbacks as an effective attacking tool.

Atlanta started with their natural game, exercising their control the match from the beginning since they like possession-based football. They seemed calm in spite of the intense pressing of the opponent. 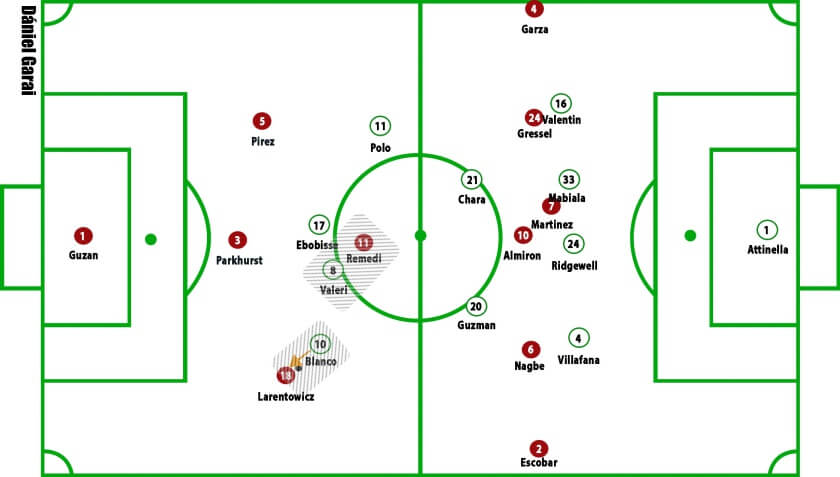 Portland aimed at block the centre thus Atlanta could not access in it. They tried to force to one side and covering the pass route towards Remedi therefore theoretically they could stop Atlanta’s progress.

In the first 10-15 minutes, Portland’s pressing caused some problems for Atlanta which resulted in some backwards passes. In reaction to the press, Atlanta used direct passes towards Gressel and Nagbe in a few situations for a tool to bypass the press. In other occasions, Nagbe dropped around the halfway line in the right halfspace in order to receive passes from Larentowicz since Atlanta favour this side over the left. However, the visitors pressing scheme was able to stop this progress with tight mark and intense press on Nagbe.

Although after a while Portland’s intensity starts to drop and they moved deeper, thus Atlanta was able to progress much easier.

After the first few minutes, Atlanta confidence did not break and they started to find ways to create a few chances. By the end of the first 30 minutes, they had some major scoring chances with Almiron and Martinez. It was evident that they will score just time was the question. The biggest chances created through crosses due to Portland could not handle long switches of play or pinned Garza and Escobar. Another weapon for scoring chances created through those counter-pressing situations where Atlanta could win the ball back and quickly turn into an attack.

Portland’s pressing scheme was able to prevent passes from Larentowicz to Escobar but when Portland sit deeper, the home side could use this pass connection. This was important since Atlanta aimed to create an overload in the right halfspace through Escobar, Nagbe and Almiron. There is an instance for this, where Escobar pass to Nagbe then he bypassed his marker and combined with Almiron

As I pointed out, Garza first target was crossing, however, I show a different occasion where he tried to pass through Portland’s defence with combinative play. The pass to Garza attract the respective fullback, therefore, this pulled him out which created a gap between the fullback and the centre-back. This is what Atlanta targeted in this situation.

However, the leading goal has occurred in a different way. When Atlanta United lost ball Nagbe, Gressel, Remedi and the wingbacks’ primary focus were on intense counter-pressing in order to win the ball back. Meanwhile, Larentowicz and Pirez immediately started to track the opposite attacking player in Portland’s half, thus they could prevent passes towards them. This caused some important interceptions or tackle. In one of this situations, Pirez made that tackle and the free ball moved back to Portland’s box where Josef Martinez picked up and turned in goal. Since he is impressive in 1v1 situations against the goalkeeper he was able to put the ball into the net with quite an ease after bypassed Attinella with dribbling. 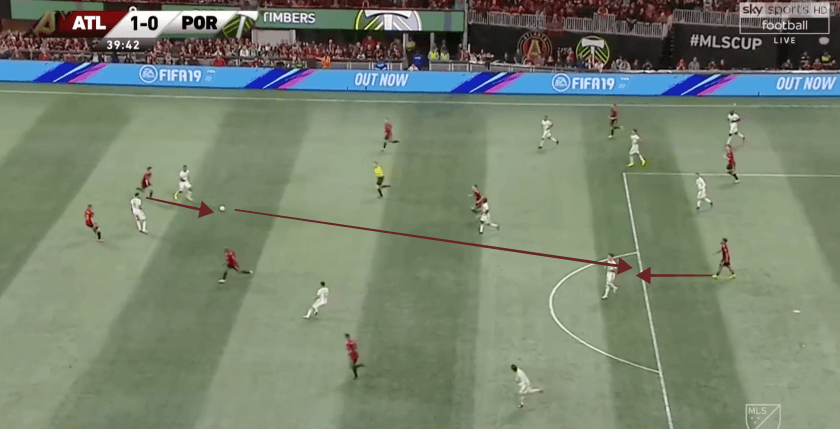 The goal technically decided the clash since after that Atlanta would sit back into a defensive structure and emphasised on counter-attacks. However, Portland thought it differently as they switch to attack and almost equalised with a header. Guzan’s crucial save denied it. The demoralising affection did not appear in the second half due to the fact that Portland did not give up. They tried to attack with even more energy. However, Atlanta destroyed the whole thing with a quick goal. They advanced to the opponent’s half probably the first time in that half and immediately scored. From a set-piece situation where Escobar scored. 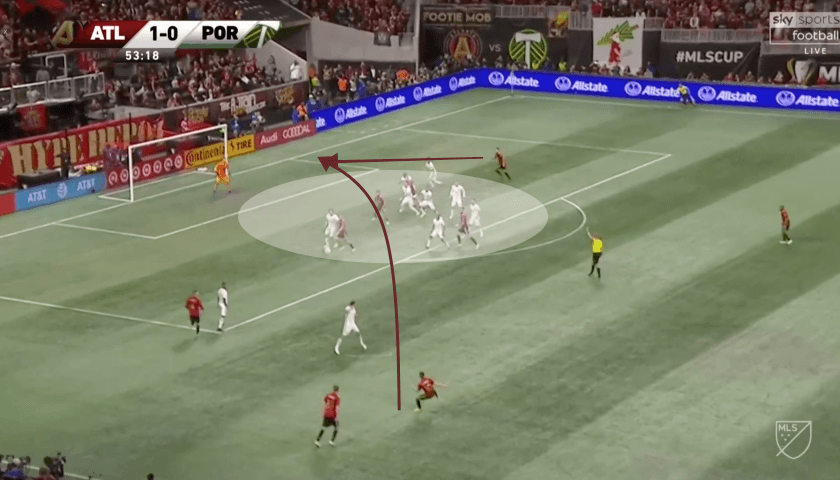 When Atlanta moved back in their defensive formation, they used diagonal midfield press in order to disrupt opponent’s attacking plans. Garza and Escobar defended in fairly high in order to pinned the dropping wingers. Gressel and Nagbe were shifting to the respective wing to press the fullbacks or the opposite centre-midfielders (Chara and Guzman).

Here is an instance from the first half for Portland’s attack in the right wing where Garza and Gressel pressed Polo and Valentin. Remedi also moved out to cover Chara and Almiron dropped to the centre in order to mark Guzman. This circumstance from Atlanta United made difficult to Portland reach the final third.

What a season has in the MLS? And more importantly, what a season has Atlanta United? In their second season in the Eastern Conference, they could dominate throughout the whole season. Unfortunately, they missed the Supporters’ Shield by the very end due to New York Red Bulls’ great finish. On the other hand, they advanced to the final and won it.

Atlanta achieved this success with an entertaining football. If you watch their game it would become obvious that they resemble for a coherent and hunger group who play very well. In the final, they showed a strong and confident game.

For the future, it will be interesting how Atlanta’s story – fairy tale – will continue?

If you love tactical analysis, then you’ll love the digital magazines from totalfootballanalysis.com – a guaranteed 100+ pages of pure tactical analysis covering topics from the Premier League, Serie A, La Liga, Bundesliga and many, many more. Get your copy of November’s issue for just £4.99 here or preorder the first of TWO December issues right here.