Bring up the new United States Men’s National Team (USMNT) coach Gregg Berhalter’s name to fans, and their first image will most likely be his goal that never was against Germany in the 2002 World Cup quarter-finals. Now he has the task of rebuilding and putting his stamp on the USMNT program. As a player Berhalter was very well traveled, representing clubs in the Netherlands, Crystal Palace, and even 1860 Munich before heading back to the US to join LA Galaxy.

His coaching career began in Sweden with Hammarby. He was ultimately fired for not being able to produce enough goals with a team that should have been at the top of the league. This helped shape his philosophy on the road to his final destination in the MLS with Columbus Crew. In this tactical analysis, we are going to look at the tactical philosophy that Berhalter plans to implement with the USMNT, based off of his approach with Columbus Crew.

Philosophy at Columbus: Disorganise the opponent

A staple of Columbus Crew under Berhalter was the ability to create positional advantages in different areas of the pitch. He would set up his squad in an attacking system that allowed for fluidity up front and the ability to get numbers forward.  The number one thing required for this is constant off-the-ball movement in Berhalter’s system to create scoring opportunities.

This goal below by Gyasi Zardes, who redefined his career from bust back to prospect under Berhalter, shows the requirements of attacking players in this system. The ball is played to Frederico Higuian, who slides a ball through to Zardes, as the defence is being drawn out by another forward. 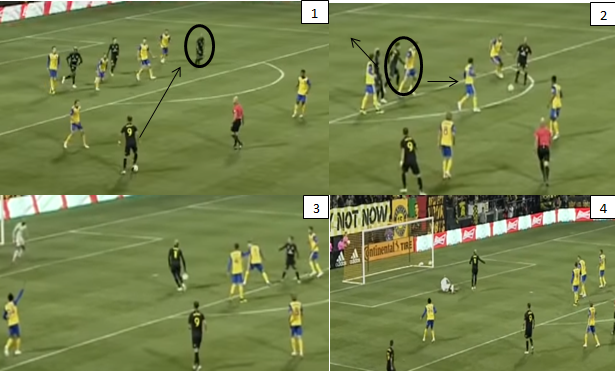 Another sequence against Colorado Rapids, which can be seen below, shows Berhalter’s system focusing on positional overloads. The combination play is rather simple, looking to exploit space behind the full-backs. This sequence did not lead to a goal, but is a staple under Berhalter, as many attempts are created off of crosses from these positional overloads. 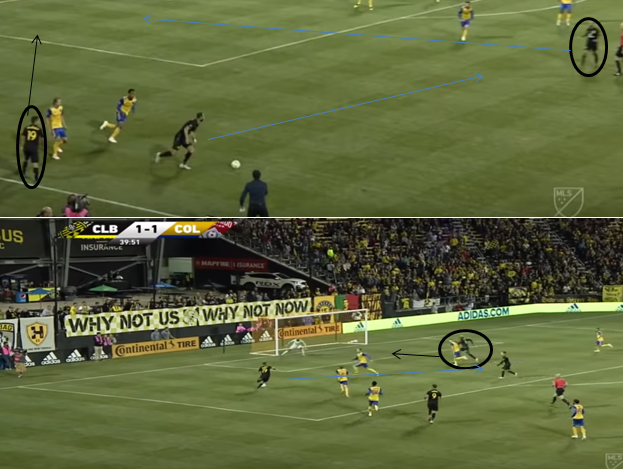 While both of these chances focus on the Crew in the attacking third, Berhalter’s system also focuses on building up from the back. This is just as dependent on the attackers’ off-the-ball movement as it is on the defenders’ distribution.

Berhalter likes to have center-backs or a deep pivot who can switch the point of attack directly or through combination play. This is represented perfectly in a goal against NY Red Bulls, which ended up being one of the best build-up goals of the MLS season.

As shown above, Berhalter requires his centre-backs to have the ability to switch the point of attack to a full-back, who has space from his winger occupying the NY Red Bulls’ full-back.  As you can see this opens up space for Higuain, who has the wide open option of Zardes, due to the multiple attacking diagonal runs. This creates a positional overload – part of Berhalter’s system – and allows one pass by Higuain to beat three defenders and lead to a Zardes goal.

Full-backs in the attack

Another trademark of Berhalter’s system is the incorporation of full-backs into the attack. During the Crew’s 2018 campaign, Milton Valenzuela and Harrison Afful were tasked with incorporating themselves on a consistent basis. Berhalter’s goal is to have attacking wingers such as Stantos and Meram occupy opposing full-backs, which in turn creates spaces for the Crew’s full-backs to exploit.

For this to happen as well, there needs to be a deep pivot, which was the position Wil Trapp took. We can expect to see Trapp in the upcoming friendlies playing that particular role. This set-up is part of the reason that Columbus’ Attack Zones are predominantly equal out wide.

In the picture below you can see this in full effect. As Higuain dribbles forward, you can see Patrick Mullins and Gyasi Zardes occupying the two opposing defenders, leaving space for Valenzuela. This allows Valenzuela to find Zardes who is making a diagonal near-post run to create a scoring chance. This type of chance can be seen over and over again when examining the 2018 Columbus Crew. We can be equally sure to see this in Berhalter’s version of the USMNT.

This does not come without its drawbacks, however. The Crew were exposed in their defensive third on the counter, whether it be through combination attacks or direct switches of play. If your full-backs are going to be attackers, it will certainly require your centre-backs to be strong one-on-one defenders.

As you can see in the Crew’s game against FC Dallas below, one pass exposes Valenzuela’s positioning on the field. This forces him and another defender into a full recovery sprint as Columbus are in an open one-on-one defending situation. 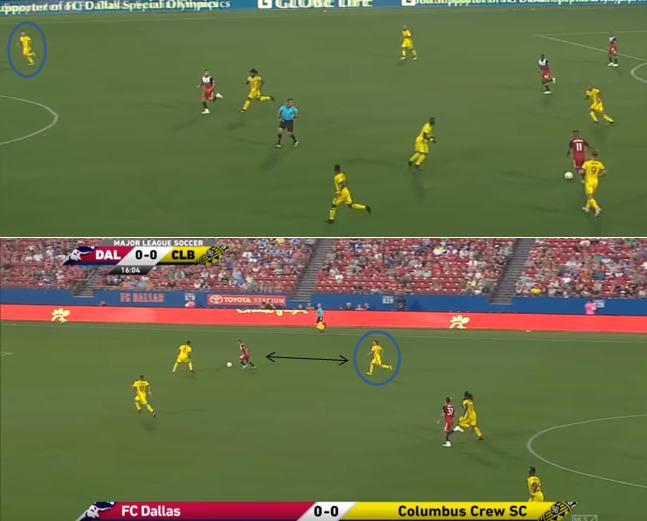 As you can see below this is obviously a gamble that he is willing to take. Wil Trapp has made a solid career of starting attacks like this, and we can expect him to be a part of Berhalter’s immediate plans in the US squad because of this.

While Berhalter incorporates a possession-based and fluid attacking system into his squad, his USMNT side shouldn’t be expected to press high as most would think. His system does not call for static formations, but allows for him to adjust based on his opponents.

At Columbus you usually would see the Crew lineup in a 4-2-3-1 or a 4-4-2. Within this formation he likes to employ a medium press and try to make the opponents play predictable. You will most likely see the US line up with two blocks of four that shift to players in different channels in their own defensive third.

Berhalter likes his squad to press high at times as well. This is all based off different triggers, hence trying to make the run of play predictable to defend. Columbus usually looked for specific areas of the pitch to employ their high pressure, often close to the touchline. This was especially true if a ball was dropped back to a full-back.

This set-up does not come without its limitations, especially if centre-backs aren’t able to coordinate proper positioning with the midfielders. The Crew found themselves exposed by the oppositions’ ability to switch the point of attack. As Berhalter takes over the USMNT he should be keenly aware of this, as the Crew conceded more goals than they scored last MLS season. 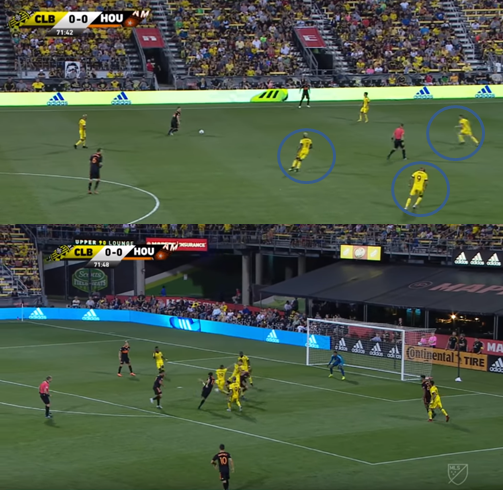 What is he taking over?

The United States’ failed qualification for the 2018 World Cup is well documented and was cause for a much-needed rebuild. When looking at this rebuild tactically, we have to understand faults within the United States prior to Berhalter taking over.

During Klinsmann and Arena’s failed campaign for the World Cup, much was criticised about the United States’ lack of possession and build-up, especially during Concacaf qualifying. The fact of the matter is a great majority of those players, and tactics for that matter, will not be used in this World Cup cycle.

To analyse that state of the USMNT before Berhalter we are going to look at one of their most recent friendlies against England. It was an extremely comfortable victory for the Three Lions as they dominated possession and scoring opportunities. 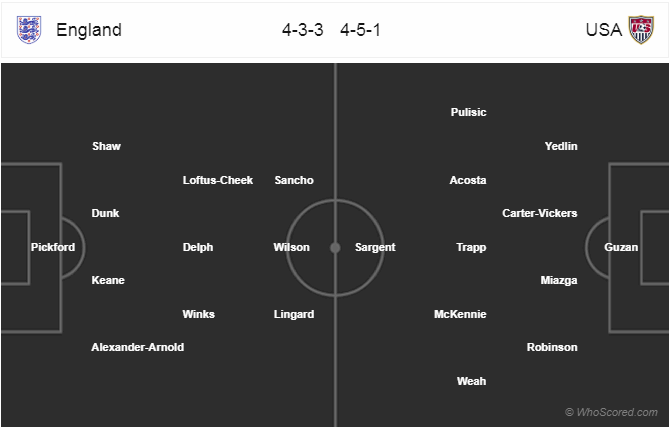 Many of the players in the line-up in this November friendly under interim manager Dave Sarachan will certainly be on Berhalter’s radar. As you can see below, in the 3-0 defeat the US were on the back foot, while England had multiple players causing havoc in the attacking third. Out of the United States’ 469 passes they tallied zero through balls. Other than a Christian Pulisic attacking dribble, they didn’t create many opportunities despite delivering 15 crosses.

As you can see for the Three Lion’s second goal, the US defenders were required to defend desperately around the box due to the pressure of England’s attackers. This allowed for players like Trent Arnold-Alexander join the attack, as he did for the second goal. Berhalter’s system will hopefully provide more possession for the Americans to prevent this type of defending consistently throughout a match, but they may still be susceptible to this type of attack.

The United States’ best scoring chance against the Three Lions showed the best and worst of their attacking chances with Pulisic. As you can see below, the Chelsea-bound attacker was able to beat four defenders to create a great scoring chance. As he tries to create an opportunity for his teammates off of the rebound, however, he does not have many options.

The essential question everyone will be asking is: what will the US look like under Berhalter? While this has been laid out in the above analysis there are a couple things that can be examined, short and long term. One should never overreact to friendlies, especially the first under a new manager, but there will be high anticipation leading into the United States match against Panama on Sunday for obvious reasons.

We should focus on how Berhalter’s core principles are implemented into the USMNT. In the short term, one should analyse if the US are attempting possession-based football focused on off-the-ball movement by its attackers. Also we should look to see if they create chances similar to how the Columbus Crew did in 2018, using a fluid attack, creating positional advantages and overloads, and incorporating full-backs into their attack.

In the long term, Berhalter will have to look at how he can integrate the young talent he has into his system. Many of the players we will not see on Sunday will certainly have a role to play going forward under the new manager. Names like Pulisic, Yedlin, McKennie, Adams, Sergeant, and Weah all possess talent that could thrive under Berhalter’s proactive system.

If he is able to incorporate what he established with the Crew in the MLS into his new role, Berhalter will have a good chance of producing positive results for his country.

If you love tactical analysis, then you’ll love the digital magazines from totalfootballanalysis.com – a guaranteed 100+ pages of pure tactical analysis covering topics from the Premier League, Serie A, La Liga, Bundesliga and many, many more. Buy your copy of the January issue for just ₤4.99 here, or even better sign up for a ₤50 annual membership (12 monthly issues plus the annual review) right here.